Leech Mob: A Novel about a Connecticut Gang is pure entertainment

Hey Guys,
After 8 years of writing Leech Mob: A Novel about a Connecticut Gang, I believe that it’s finally ready for ya! I promise you, your high school teachers will hate it –which means they’ll never assign you Leech Mob homework, so you have to be daring enough to read it on your own
But what’s the novel about, you ask?  Basically kids torturing each other.  We do what we do best.  We get into street fights, we pull school pranks, we go to cool raves.  You’ll learn how to make poon-tang–not what you think.  Wait!  I think I should say here that you shouldn’t try anything that you read in this novel.  We got arrested a bunch of times–not good on the old college application!  So, this ain’t your regular novel. For more on the story, including a few excerpts, visit our websites at www.leechmobnovel.com and www.facebook.com/LeechMobNovel

Posted by John Harwood at 10:19 AM No comments:

Leech Mob Novel Appeals to Teens and to Reluctant Readers

Even though the school system tried to kill me, I survived because our gang was a cool bunch of friends who always had each other’s back in an otherwise unfriendly world. Leech Mob: A Novel about a Connecticut Gang is the wisdom about growing up that I was able to get across enemy lines.  I leave it in the hands of you kids now, so start reading!
What?  You don’t like reading books?  Well, neither do I if you’re talking about most of the boring novels we were assigned to read in high school. But Leech Mob is altogether different.  It’s about high school kids who are experimenting with being adults.  We make lots of mistakes, but our lives go on.  Yep, there is some violence in the book, but the fights are real rather than glorified.  No one walks away a hero, and not everyone walks away. For more on the novel, including a few excerpts, visit our websites at www.leechmobnovel.com and www.facebook.com/LeechMobNovel
or order Leech Mob - A Novel About A Connecticut Gang here:
www.amazon.com/dp/0989057003/ref=cm_sw_su_dp
Posted by John Harwood at 10:06 AM No comments:

Leech Mob: A Novel about a Connecticut Gang explores dating in high school

Hey Girls,
Have you ever felt dissed by a guy?  If so, then there are several chapters in Leech Mob: A Novel about a Connecticut Gang that might interest you about high school dating. But Chapter 7 is the real clincher that will shock you ladies with "the players" approach.  Now I don’t mean to sound one-sided against the guys here... because I explain just how ruthless the girls can act in Chapter 10.  So you’ve got to read the book and look from both perspectives.  For more on Leech Mob, visit us on FaceBook and on our website
Or listen to the first two chapters read as an audio book here:
www.youtube.com/user/leechmobnovel
Then order your copy of Leech Mob here: www.amazon.com/dp/0989057003/ref=cm_sw_su_dp


Posted by John Harwood at 2:38 PM No comments:

Being the new kid in high school, Kelly Hayes fights the bullies in Leech Mob Novel 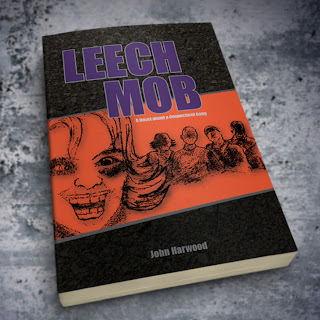 It’s not easy being the new kid – especially when you’re new to high school and everyone has known each other - like - since the first grade. I know - cause I was in that predicament myself.   I had barely stepped off the school bus when I was in a fight on the first day of school. But the teachers didn’t want to spend any time investigating the incident.  They just assumed that I caused it rather than the school’s elite - a bunch of preps, jocks, and honor roll kids.  It’s weird how a thing like that can seem to go on for rest of your life! So read the book and decide if you agree or not. For more on Leech Mob, visit: www.leechmobnovel.com

Or listen to the Leech Mob audio book and interviews with
the author here: www.youtube.com/user/leechmobnovel
Then order your copy of Leech Mob here: www.amazon.com/dp/0989057003/ref=cm_sw_su_dp
Posted by John Harwood at 1:57 PM No comments:

Leech Mob: A Novel about a Connecticut Gang author biography of John Harwood 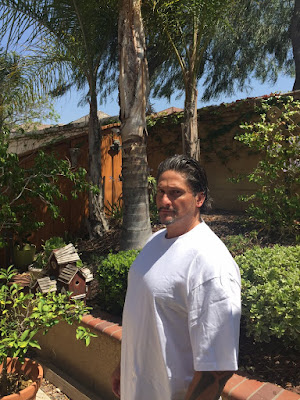 Just like my main character Kelly Hayes, I was born in New York and moved to Connecticut at the start of high school, graduating after a series of stints at various schools. I then attended a semester here or a year there at several New England universities, struggling with the normalcy of traditional conventions. But it’s high school that left lasting impressions. As with all of us, these were growing years, learning about myself and others, exploring what life is about, pushing the boundaries society puts on us, and learning where I fit––and often DIDN’T FIT––in the grand scheme of American society.
It is these four riotous years which have served as the basis for Leech Mob––taking artistic license to the limit with the wild parties, the high school pranks, the underground music scene, brushes with the law and, of course, the brawls! The characters are a conglomeration of the fascinating people who passed through my life at the time.  I wanted to write a book that young people would have fun reading. As a kid, I loved books, but was turned off to reading during high school because the novels were totally irrelevant to my life. So I decided to start with the important social issues of growing up––with a bunch of crazy and often painful stories from my teen years that I wove into a fictionalized text.  The end result was  Leech Mob: A Novel about a Connecticut Gang, which you can read about and order on my website

I want the youth to know that I love them and I wrote this book for them. Hopefully, they will benefit from the experiences of Kelly Hayes.


Order your copy today at:
www.amazon.com/dp/0989057003/ref=cm_sw_su_dp
Or check out the first two chapters, read as an audio book on Youtube: www.youtube.com/user/LeechMobNovel

Posted by John Harwood at 1:04 PM No comments:

Here is Leech Mob's official website! Check out the synopsis, excerpts and all that good stuff.  And also check out our YouTube channel:

There you can find the first two chapters of Leech Mob, available on audio book, artwork, music and interviews with the author. Oh yeah, and don't forget to purchase the book here:
www.amazon.com/dp/0989057003/ref=cm_sw_su_dp 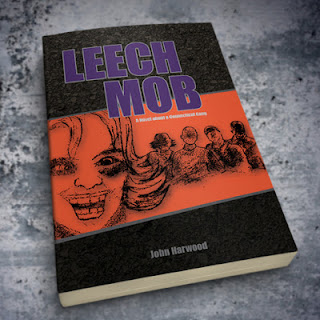 In the early 1990s, Kelly Hayes, a friendly fifteen-year-old, moves from New York City to Connecticut with his recently divorced mother in search of a finding a simpler and safer life in the lovely town of Riverview. But when the school year begins, students, teachers, and even the principal consider him an outsider and a troublemaker. Bullied and beaten by the Jocks and the Preps, Kelly finds friendship with the other outcasts in the school but gets caught up in a world far more complex and dangerous than his urban upbringing had prepared him for.

From the dilapidated confines of State Hospital, Kelly relates to his psychiatrist the raucous and riotous events of the last year that changed him from a typical high school kid to a rebellious youth, a problem who the school and the community helped to create.

Leech Mob: A Novel about a Connecticut Gang is much more than an updated Catcher in the Rye or The Outsiders. With brilliant characterization and dialogue, Harwood introduces a cast of rebel teens who will inevitably become icons for our modern dysfunctional age.

For further information, see our website: www.leechmobnovel.com
Order the novel at: www.amazon.com/dp/0989057003/ref=cm_sw_su_dp
Or hear the first two chapters read as an audio book here:
www.youtube.com/user/leechmobnovel
Posted by John Harwood at 12:41 PM No comments:

Leech Mob: A Novel About A Connecticut Gang Book Release

Leech Mob: A Novel about a Connecticut Gang

Announcing the release of a Young Adult Fiction novel for Mature Teens
Linda Thiel: Press Agent
John Harwood, former resident of Brookfield, CT and graduate of Brookfield High School, has published a novel about a teenage boy’s first year of high school in a Connecticut town. Readers are taken for a wild ride from school to sleazy night clubs to mob brawls in a true to life teen drama with candid vignettes into the real world of adolescence that most adults have not been privy to until now.

Set in 1990, behind the facade of New England propriety, Harwood’s main character Kelly, a newcomer to the area, becomes a victim of bullying and assault on his first day at school. Each of the novel’s chapters deals with a social issue as pertinent today as it was twenty years ago. Kelly is seamlessly drawn into a world of absent fathers, drugs, vandalism, promiscuity, police profiling, date rape, stealing, and ultimately mental illness that lands him behind locked doors at State Hospital.

Though some of the Leech Mob characters are likable while some are not, each one is uniquely developed with depth and clarity. Once idealizing the secret and concealed world of unacceptable behaviors that rebellious teens embrace, the Leech Mob finally discovers that their gang is not worth the tragedy that it has perpetuated.

Hard-hitting yet humorous and insightful, this book is a must-read for teens as well as for parents and teachers, who want answers to the questions spawned by recent tragedies of violence in our schools. Eight years in the writing, Leech Mob is a work from the heart and the soul.

Leech Mob: A Novel about a Connecticut Gang by John Harwood
is available here: www.amazon.com/dp/0989057003/ref=cm_sw_su_dp

Or hear the first two chapters read as an audio book here:
www.youtube.com/user/leechmobnovel

Visit our website and read excerpts from the novel here:
www.leechmobnovel.com
John Harwood can be contacted by writing to him at:
leechmobnovel@gmail.com

Posted by John Harwood at 12:40 PM No comments: